Edith - In the Beginning

In the summer of 1939 Britain was preparing for war but above the River Deben in sleepy Suffolk a different battle was taking place, one that revolved around a much earlier invader. When Mrs Edith Pretty invited local archaeologist Basil Brown to have a go at excavating the enormous mounds on her land, she was confident that he would find something. It was to be one of the most important finds in British archaeology.

The discovery of the Sutton Hoo treasure has recently received worldwide fame through the Netflix film, The Dig. This alternative interpretation was originally commissioned by the National Trust and performed at Sutton Hoo in 2019 to commemorate eighty years since the discovery of the burial ship and we are proud to be launching its amateur première.

“…this is at heart a sensitive and enjoyable depiction of a relationship that brought us one of the most momentous historic discoveries of the Twentieth Century. That is some achievement, and Director Robert Little and the Sewell Barn team can be proud of their accomplished production.” Julian Swainson, Norwich Eye [click here for full review]

A fascinating show at the Barn tonight - the story of the discovery of the Sutton Hoo treasure. And we were also made aware of the impact of the First World War and the coming of the second. Using documentary form,  Karen Forbes' play explores the impact of the finding of the treasure on individuals' lives through the use of voiceover, flashbacks and naturalistic scenes. Lauren Baston gives backbone to the piece as Edith Pretty and conveys her role with strength and sensitivity. As Basil Brown, Andy Lofthouse is appropriately awkward and enthusiastic in equal measure. They are ably supported by the rest of the cast but in particular, Judi Daykin deserves special mention for her beautiful singing as Queen Raedwald - enough to send shivers down your spine! Sound, projections and lighting enhanced the story with impressive work from  Chad Mason whose voiceovers as Colonel Pretty and Churchill were moving and effective. Congratulations to all! Clare Williamson [Joint Artistic Director, Sewell Barn Theatre]

"If you're looking for a show today, I really do recommend this one! Such heartfelt performances from the cast, telling a fascinating local story." Joanna F 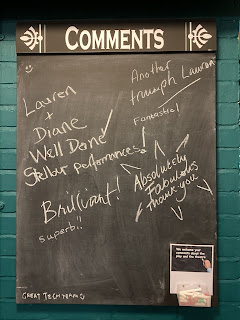