Flora Thompson's well-loved trilogy (Lark Rise, Over to Candleford and Candleford Green) were written during the years of WW2, reflecting largely autobiographically on Thompson's own life in late 19th century rural Oxfordshire. In the 1970s, Keith Dewhurst adapted the three books into two plays: charming, humorous, observant, poignant, and using traditional music to link wonderful vignettes of village life. They were originally staged in the National Theatre's Cottesloe space, using a promenade style. Finally, the books were adapted again for television in 2008.

It's a rare treat to have the chance to see both Lark Rise and Candleford performed together (each is a full-length play, standing on its own), not least because of the large cast required for each show (two dozen actors across the two plays), as well as four first-rate musicians. Robert Little and his cast have done a wonderful job, using our unique and intimate space with simple staging, a marvellous band and a tremendous family feel.

We were delighted by so many positive comments from our audiences, via email, social media and our audience survey.

"I have been coming to Sewell Barn for years but this is the most brilliant production I have ever seen there - and elsewhere.  Congratulations to ALL concerned" Elizabeth N

"I came to Lark Rise and Candleford because I saw both at the National Theatre in London many years ago.  Your production does them credit." Carolyn A

"A seamless string of vignettes, gently and accurately observed, and presented with sincerity and sympathy, humour and pathos." Cassie T [Joint Artistic Director]

"...how wonderful to see the theatre alive with music, drama and dance! Congratulations to Robert Little and his team for a marvellous evening's entertainment. Looking forward to Candleford next week!" Clare W [Joint Artistic Director]

"Last night was my first visit to Sewell Barn and I was very impressed both with the theatre itself and the production of Lark Rise which was excellent. My wife and I also have tickets for “Candleford” next Wednesday the 18th - very much looking forward to it." Mike H 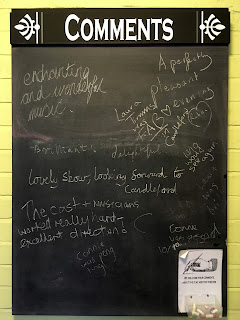