Dinner parties can delight and entertain; they can also cruelly humiliate and end in tears. Moira Buffini’s deliciously bad-taste comedy Dinner does both, mixing familiar and unfamiliar ingredients to create startlingly original drama - exploring the frustrated lives of the rich and apparently successful, whilst creating recipes that are “definitely not the kind of thing you find in Delia Smith”. On a night of thick fog, the fabulously elegant Paige is throwing a celebratory dinner in honour of her husband, Lars, and his best-selling pop psychology book ‘Beyond Belief’. She has been preparing the menu for months: ‘Primordial Soup’, ‘Apocalypse of Lobster’ and for dessert ‘Frozen Waste’. She’s even employed a professional waiter especially for the occasion…

The reviews of this cracking black comedy started to arrive as soon as the bows had been taken after the first performance. This show contains strong language and adult themes, and is not for the faint-hearted; but if you like your theatre to be thought-provoking, hilarious, shocking and surprising, this was clearly an evening not to be missed. We would add that there was one gentleman in the audience on the final night who was making his FIFTH visit to the show, he enjoyed it so much...

"I've just been to see the production of Dinner at Sewell Barn. An excellent evening of theatre. The cast were superb playing the roles in a very understated manner and it genuinely felt like you were attending a dinner party with them. The tension simmered throughout without it ever feeling over done and the peaks of anger and venom were excellently judged, again without being too much. The comedy landed where it needed to and it never detracted from the drama. As someone who is involved in a small community run theatre, please keep supporting the fine artistic work going on at Sewell. I'm looking forward to my next visit!" Colin B

"Thought provoking and blackly comic. The whole cast were superb." Becky B

"Seeing 'Dinner' was an absolute treat! The expert acting and high tension of the script were incredibly absorbing, which made the ending even more impactful. I loved it!" Elle G

"A whole string of fine performances from a stellar cast in this one. Well done, all!" Trevor B

"Stupendous performance -- and I do not say that lightly. Congratulations to all concerned." Janet H

"Best production I've seen at Sewell Barn, and I saw it on opening night. Sat with the proud parents of the play's director, and told them that they had every reason to celebrate the achievement made by their daughter, and all the cast & crew that went to make this play so successful & enjoyable! A pitch-perfect dark comedy with a great ending to boot!" Jack S

"I have just got home exhausted after the opening night of Dinner. Horror and hilarity combined to give us a gruesome feast of an evening, which made us laugh and wince, sometimes simultaneously. First rate performances all round, razor sharp direction and a great script made a fantastic evening. I would like to come back for a second helping..." Barnaby M

"Dinner is one of the best plays I have ever seen. And I've seen rather a lot . . . Go and See It if you possibly can." Golda C

"We are well prepared for the tone of tonight's production, as we enter the theatre/stage we are greeted by a dark sombre set, and hanging over the dining table a chandler of knives, very subtle. Then the fun begins, as the wonderful hostess joylessly rips into her special guests. No undercurrents of tension, the emotional turmoil is on the surface. Threats linger in the air, words, even food, which may be alive but is dying to feed them. Perhaps death is waiting here, but for who? Pressure, disbelief, shock and anger plus the wonderful relief of painful humour. Laughter and comments greet stinging events, even profanity, is funny, if targeted correctly. Add rivers of drink, crazy food, fitting costumes, and all is ready for your gourmet evening. Don't miss, relish this very bittersweet comedy. :-)" Mark M

"This is a terrific night out - riveting performances and a script that's hilarious and thought-provoking at the same time. Heartfelt thanks to all involved." Jennifer S

"Congratulations to [Jen Dewsbury] and all the team from both of us!  I think it's the best production that the Barn has done this season, with others previously setting very high standards." Phillip W

"Well done Ginny Porteous, John Holden, James Thomson, Sabrina Poole, Jen Dewsbury and all the rest of the cast and crew. What a great show and a fantastic twist at the end. Don't miss it!!!"Ruth H

"Tastes vary and may it ever be thus but if you’re partial to indulging strange appetites then you could do a lot worse than attending Sewell Barn’s current production of Dinner, written by Moira Buffini and directed by Jen Dewsbury.

Equal portions of dysfunction and artifice will be served at a middle class soiree that’s anything but middle of the road. The hosts and their guests are supposed paragons of intellectual and economic success but all of them exhibit deep inabilities to live up to basic cultural norms despite consciously placing themselves as opinion-formers, zeitgeist surfers, or keepers of state secrets.

Paige, who lacks any form of real purpose, has convened the evening to ‘celebrate’ her husband Lars’s new book, a monstrous misreading of Nietzchean thought wrapped up as advice literature. His undergraduate sweetheart, Wynne, is a conceptual artist who arrives fresh from the failure of her relationship with an MP called Bob and appears to latch onto Lars as her new concept. Hal and Siân are newlyweds for whom the honeymoon is definitely over. Their careers, ages, and outlooks are painfully mismatched and they find themselves trapped between past horrors and future consequences. Bob’s place at the table is taken by Mike, a van driver who was unknown to the party until an accident in the fog outside the house forces him to ask for help. Mike’s presence and ability to slice through the façade has a precipitating effect on the tensions that are simmering around the table. The cast is completed by The Waiter, an unnerving character who serves Paige’s perverted culinary creations as well as the true objective of the evening.

This ensemble cast features some of Norwich’s brightest stage talent. With no slack whatsoever they play with language (often proudly rude), class, and their disgusting food. Strong affect, even olfactory if you sniff hard enough, is at the top of the menu with Dinner. If all this sounds grim then be assured that it is and deliberately so, but the audience on the opening night was rolling with laughter as often as they were gasping with surprise or struck dumb by the evening’s events. Be sure to book your own place at the table before April 14th." Karl H

"...this was a stunning drama, with the most excellent acting.

Ginny Porteous [Paige] can create for us the most damaged of psyches imaginable, yet maintain our sympathy and love. A consummate actress, indeed. Harriet Waterhouse [Wynne] is another who makes perfect acting look easy. Sabrina Poole as Siân had less to do but admirably found extra layers. Trevor Markworth's role was that of arguably the real monster, Lars, and his unfussy approach was perfect for that, almost exuding a chill at times, while James Thomson made Hal into an unhappy and yet effective foil for his unsound philosophy, and a much-needed humaniser in general. Will Haragan confidently brought in common sense and assurance in the person of Mike, and John Holden completed the ensemble with the very effective ominous strangeness of the waiter.

Beautifully paced throughout, and the sharp bits of rapid action slick and natural... So - what a treat: seven experienced players, strong, confident, fluent, and flawless, in a very strong drama [with more laughs than I'd expected], in the middle of an enthralled, sometimes shocked, but always genuinely happy audience. I'm not letting you know any more about it - the excellence of the Sewell Barn should be enough – but there are four more performances, so do go. It's highly recommended!" Rob F-W 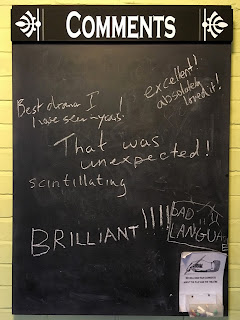