“This book is not about heroes. English poetry is not yet fit to speak of them.” So wrote Wilfred Owen in the preface of his collected poems.

This beautiful, moving piece of theatre is presented in the month of #Armistice100. Owen and Siegfried Sassoon were two of our most influential WW2 war poets, and Stephen MacDonald's creation is a sincere, powerful and sensitive tribute to them both.

We've seen audiences mesmerised by the fine performances of our two actors, and many a surreptitious handkerchief was produced.


"Just returned from seeing ‘Not About Heroes.’ Most of what I want to say has already been said by others. Such an intense, moving and insightful production. Two incredibly talented actors. Congratulations to all involved in this production, it was an incredible achievement." Ruth E

"Awesome performance this afternoon Zachary Green and Matt Scantlebury. Moved me to tears. You know someone has real talent when you no longer see your friend, on stage son and general lovely chap but instead see a young man full of dreams for the future that he has glimpsed senselessly marching toward death. So proud and honoured to have seen this fabulous piece of theatre." Kat T

"Such a fantastic performance from both Zac and Matt - so pleased we got to see this - very very well done." Andrea W

"If you don't have plans this weekend, go and see this. If you do have plans, change them and go and see this. A hauntingly beautiful story about two of my all-time favourite poets, brought to life by two first-class actors. A wholly captivating and deeply moving production. Congrats to the whole cast and crew!" Sarah J

"Not About Heroes is a very fitting tribute to the loss of life in the first world war. Two extremely accomplished performers hold us in awe for two hours as they explore poetry and their relationship as well as war itself. The result is desperately moving. The actors are to be commended for their naturalistic performances, and the intimacy of the Barn captured the mood effectively. There are six more chances to see this beautiful play. PS: I did go and see [another] play last night, and there was no comparison to be made, despite having a professional cast!!" Barnaby M

"I went to see a play tonight about two people who have influenced my life in ways they could not have imagined. One hundred years ago one of them was dead and one of them would live for another 50 years or so, carrying the guilt and the glory of his dead friend. I'm talking about Not about Heroes at the Sewell Barn Theatre, a sensitive, moving and joyous portrayal of the emergence of Wilfred Owen as a poet of enormous stature, championed by another powerful poet of the first world war, Siegfried Sassoon. This is a beautifully nuanced two hander, confidently directed by Rob Tiffen and performed by Zac Green and Matt Scantlebury. The set is simple but clearly conveys movements of time and place and this is enhanced by subtle but atmospheric changes in lighting and sound.

For me, the greatest power of the performance lies in the handling of the poetry - lines that are so well known are delivered with a freshness which creates an intense immediacy made all the more poignant by our foreknowledge of Owen's imminent demise. You had me in tears, guys, and I wept for 'the pity of war' because 'the poetry is in the pity'. Please come and see this play - it is marvellous and more than worthy of your time and, maybe, your tears." Clare W [Joint Artistic Director] 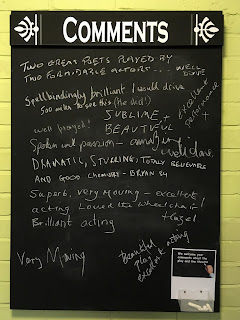