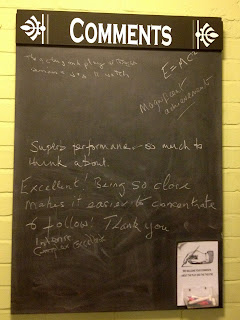 An email to Jane, who plays Margarethe:

We came to watch Copenhagen at the Sewell Barn last night. As you may be aware we go to most of the performances. What an undertaking. With only 3 characters, you all had so much to learn!

I was so pleased that we have been watching The Saboteurs on More 4 as it is about the same event but from a slightly different perspective. It helped me to feel that I knew a more detailed background of the setting. The two men managed very well to make the physics accessible to people like me...I got a 9 at O level science as I did not bother to revise stuff that I could not understand. I assume that I wrote my name correctly at the top!!

Your character stopped it from becoming too dull and brought in the humour and the human touch. You carried that off so well.I also enjoyed the way that you all...you in particular...managed so well to alternate between narrating and being your character.

I like to leave the theatre with something to muse on and this play did that for me. I assume that the conversation has been a source of speculation, without anyone really knowing the complete truth. How scary to be left with the idea of the alternative conversation. It doesn't bear thinking about!

I felt disappointed that the theatre was not as full as you deserved. I do hope that it does not make the directors move towards easy watch theatre as we get enough of that in the mainstream theatres. I hope that you get good audiences next weekend. Thank goodness for places like the Sewell Barn.

We were at the first night. Well done to all of you for an extraordinary performance . The script was so detailed and must have been difficult to learn. The story is still under discussion here, and the secret is one that we will not know for certain.

The Sewell Barn puts on really challenging plays and this one is outstanding. Thank you for all your efforts in this and I hope you have a good run.

Want an intelligent, thought provoking evening? Go and see Copenhagen at the Sewell Barn Theatre. Lots to think about, and some laughs too.

More audience feedback, both on Copenhagen and praising the season it concludes:

We would like to congratulate the Sewell Barn  company for an excellent season of drama. You have taken on controversial subjects which have been challenge to perform, but have executed to the highest degree.

Last night we attended ' Copenhagen ' which the players took on with such professionalism. It was intriguing and thought provoking and caused great debate. It was made more difficult by the content of the play. Well done to all involved and we look forward to the next season.

Michael Frayn’s 1998 play is based on a secret 1941 meeting in Copenhagen between physicists Niels Bohr and Werner Heisenberg. It’s a gripping drama – what really went on when they talked?

Danish Bohr (Kevin Oelrichs) and German Heisenberg (Rob Tiffen) had been friends before the war; now Denmark was occupied by the Nazis who were looking to beat the allies to the atomic bomb.

The non-linear play is a clever construct set after their deaths as Bohr’s wife, Margrethe (Jane de la Tour) helps the men rehearse various ‘drafts’ of what could have been discussed and its profound consequences.

Politics and physics, friendship and trust, idealism and reality intertwine in an evening that the actors handle with skill and thought, ably directed by Carole Lovett. The play is neither comedy nor tragedy, the language doesn’t contradict logic yet is a mix of the present and the past, history and ‘what if …’

The evening leaves the audience glad the Nazis didn’t get the bomb and wondering about all the shadows, hopes and ideas that swirled round the world in those war years. Thoroughly recommended.
at July 18, 2015 No comments: