The opening show of our 2018/19 season brings back the work of the splendid Moira Buffini (Dinner, played in April 2018), and the first half of the run has played to great acclaim.

This witty and intelligent Olivier-winning play imagines what may have happened in the weekly meetings between the Queen and Margaret Thatcher from 1979 to 1990. There were rumours that they did not see eye to eye, and this titanic struggle between two women of different backgrounds but of similar ages – both shaped by fathers they adored – is fascinating and moving. Major events of the period are explored, with two queens and two Thatchers disputing what occurred whilst two male actors multi-role a range of key players as varied as Ronald Reagan and Arthur Scargill to create a sharp satirical comedy.


"Really enjoyed the matinee performance this afternoon. Huge well done to the cast for a fantastic play. The accents were brilliant!" Laura B

"Best play I've seen in a long time. Funny with a serious look at events of the past. Very clever use of the actors." via TripAdvisor

"...while the playwright’s inventiveness of structure and dialogue was very interesting and gave us much fun, and was greatly appreciated, I think most of them would agree that our main pleasure came from the excellence of the players. None should be singled out, because in each of them abide uncanny skills that tingled our spines with sudden recognitions and understandings. But to all of them, a very big ‘thank you’!" Rob F-W

"I’m so pleased I got tickets and started off my half term seeing this! Brilliant directing Clare! Poignant, nostalgic, sad and funny, great play performed fabulously. Well done all. x" Nadia A

"Congratulations on another very fine production which I enjoyed immensely last night. You have set the bar high again and the show will be a hard act to follow! The standard of acting was exemplary too. The play itself worked beautifully in the Barn's space. Good luck for the remainder of the run." Peter W

"Excellent play! Well worth seeking out a ticket for the remaining performances." Roger D

"Just got back from seeing it tonight. Fabulous, well done everyone. But worried I'll have nightmares after having to listen to that voice again..." Stewart T

"A very strong and entertaining show, some great vocal and characterization work. Great start to the new season!" Richard H

"I was born in 1981 so was quite unfamiliar with the play's events. However, an excellent cast galloped their way through Thatchers regime with humour and ease. A very interesting and slightly uncomfortable evening, but also very funny in places, well worth seeing." Barnaby M

"‘Handbagged’ is a brilliant show that deftly balances humour, satire, history and politics. Strong direction of a splendid cast brings conversations and narration to dramatic life that is by turns hilarious, absurd and sobering. Tinkety tonk, old fruit, and down with the Tories!" Vincent G

"Saw this show last night. Excellent performances all round. Thank you for a very entertaining evening." Tabi P 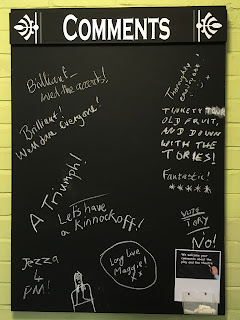