On the tail of "The Go-Between", rehearsals are already underway for Sewell Barn’s newest play ‘The Beauty Queen of Leenane’. The first play ever written from acclaimed playwright Martin McDonagh, who went on to pen ‘The Lieutenant of Inishmore’ and the ‘Pillowman’, is a dark comedy depicting the dysfunctional relation between a spinster and her domineering mother. The wicked humour and twisted violence foreshadows McDonagh’s later works, which include screenplays ‘In Bruges’ and ‘Seven Psychopaths’. Of this razor-sharp mix of comedy and cruelty, so wittingly portrayed in The Beauty Queen, McDonagh says “I suppose I walk that line between comedy and cruelty because I think one illuminates the other. We're all cruel, aren't we? We are all extreme in one way or another at times and that's what drama, since the Greeks, has dealt with. I hope the overall view isn't just that though, or I've failed in my writing. There have to be moments when you glimpse something decent, something life-affirming even in the most twisted character. That's where the real art lies.”

The four local actors of the cast expertly bring this gem of a script to life, turning from the comic, the longing and the doolally at the drop of a hat, emoting laughter, tears or gasps of horror from a watching audience, as can only be expected from a McDonagh.
at January 22, 2016 No comments:

Absolutely delighted to receive this wonderful review, both of our theatre and of our current play The Go Between, on our TripAdvisor page.

"Watched "The Go Between" on January 16th. It was our first visit to the theatre as we live 130 miles from Norwich. What a fantastic little gem, the front of house staff were very helpful and the play itself was a professional performance from amateur players. I will not single anyone out for special praise but will just say that the evening was exceptional - and I am usually very critical of "amateur theatre". Thank you to all concerned with the performance."

We were also delighted to receive a detailed and thoughtful review from our friend and theatre member Rob Fradley-Wilde:

"A very satisfying evening at the final performance of 'The Go-Between'.

Some of the success surely was in the participants' safe forwards and backwards negotiation of the set! This armature of poles and dry paper foliage at first sight seemed to fill the stage, yet through this reminder of the net or cage of social restrictions at the turn of the last century there was still plenty of room for humanity's evergreen wellings of emotion to surge to and fro quite freely; and, helped by the well-chosen minor props coming in and out of our focus as the plot required, we always understood its more prosaic suggestions of house, shed, grove, or pavilion. A clever and memorable design by ...? [the programme gives no clear attribution].

I saw less variation in playing skill than one would expect from the range of experiences brought together here: essentially we had nine good actors working their way together through a sound plot, supporting each other and enjoying themselves. A mother that any child would love, Wendy Atkinson, and her son Leo, played by Josh Oram with impressively sure command of a boy's unsureness, his innocence resistant to giving way under the growing drive of teenage vitality, together comprised the lower-middle-class insertion into the world of the landed and renting gentry. Jonathan Gale pushed into it from the other side, giving us a well-crafted study of the sharp surly antagonist Ted Burgess, awkward and brusque in his inarticulate frustration with the establishment as one of its tenant farmers. At the centre, responsive to natural feeling despite all the tight strictures of the Victorian class system at its height, was Marian Maudsley, and Emma Kirkham's clever interpretation left me always just a touch suspicious of the true proportions of helpless passion and manipulative self-interest in her character's makeup.

The Viscount [Matt Rolls] was a sympathetic figure, kindly, undeserving of any false treatment, whom we never suspected of intrigue, even when his fiancée did. The Maudsley sons, convincingly played by Jack Rumsey and Bradley Flint, were stereotypes strengthening the frame, automatically ready to lead the plastic Leo into the right paths. However the force of the family resided in Mrs Maudsley, and the strong, clear, and authentic performance of Glenda Gardiner left us in no doubt at all about this. And all the time the perfectly-cast Terry Cant ghosted the old Leo's way around and through these memories and scenes of his own past, sometimes, invisible but feeling and hurting, in the thick of things, at other times merging with us, the merely curious. His new understanding of his own repressed life as a consequence of this first trauma is the painful underlying and unifying theme of the play.

The novel's fuller ending is minimised in this version, quite rightly I'm sure. Roger Parsley also made alterations from his earlier adaptation, made for an airier playing-space, so as to focus more on intensity of feeling, and this has worked well in the Barn's tighter atmosphere, and he has managed to retain in full the suspense and drama of the book. Good use also was made of the variety of off/onstage connections available here. Plenty of interesting business with clothes, balls, etc, nothing staying static for long. Despite some unfortunate but unavoidable breaks in the continuity of direction during rehearsals, the play's movement was flawless, keeping every audience member attentive all the time, happy to be carried along at just the right pace; much credit there for everyone involved.

I'd like to complain a bit, but can't really find anything substantial enough. Maybe there was too much contraction in the latter stages; for instance [as was remarked to me] not enough time given to make Ted's suicide seem appropriate, or proportionate - not just to young folk, but to those who are old enough to remember people who lived through those actual social mores and conditions. But on the whole the balance, within the constraints of the medium, was fair and good.

Costumes quite charming, lighting good, stage management faultless; altogether a very enjoyable entertainment, with the valuable addition of plausible and sympathetic light thrown on the atmosphere of this fin de siècle period of our social history, and an important example of the development of English literature's class conflict theme leading up to Lawrence's work. Well done again, Sewell Barn – thank you, all!" 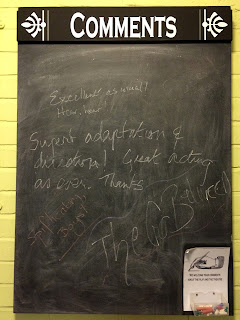