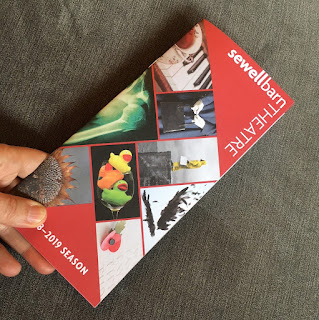 Full details will be posted on our website very soon, together with audition notes, but in the meantime, here is a brief precis of the 2018-19 season at the Sewell Barn.

In addition, we are delighted to host two special evenings 'for one night only':

We hope you agree that it's an exciting and varied season, encompassing the familiar and the unknown, the merry and the tragic, the classical and the contemporary, casts large and small, and with performing opportunities for a very wide age range.

If you would like to volunteer to support the theatre in any way - backstage, front of house, stage design and construction, technical, costumes, rehearsal prompts or administration - please do contact us on admin@sewellbarnorg.

#supportlocaltheatre #norwich #theatre
at May 13, 2018 No comments:

Email ThisBlogThis!Share to TwitterShare to FacebookShare to Pinterest
Labels: 2018, 2019, Season

As the director of this show, Carole Lovett, has said in our programme: "It has been estimated that at any moment of any day somewhere on our planet a performance of will be taking place. This popularity and the seeming familiarity that everyone has with the characters and the plot is a two-edged sword. On the one hand it evokes a very positive response from the general public, but on the other hand, how does any new interpretation keep the story fresh and new?"

Our production sets the iconic tragedy in the present day. Lord Capulet and Lady Montague are rival political candidates. The weapons are not swords but fists and knives. And (as Carole goes on to say), "The tragedy of the human existence is not dependant on historical context and we all have a lot to learn from Shakespeare's study of how precious and fragile are the younger members of our society and of how they should never be ignored or taken for granted. We should always listen and we should always care."

We are particularly proud of this show, with sixteen actors of a wide variety of age and experience, including several very young and highly talented performers. From the very first night we have received some wonderful reviews - do come and see for yourself.

"Last night I made a late decision to go and see Romeo and Juliet at the Sewell Barn Theatre and I am mighty glad I did. It is such a well known story with so many versions of it around that it was an absolute pleasure to watch a production that felt so fresh and had such energy in it. I certainly don't remember laughing so much during a performance of this piece before but the cast have clearly worked hard on getting to know and understand the script and have found real humour in places. That isn't to say the show is played for laughs, far from it, it is well balanced and still packs a hefty punch. The stage was used to full effect including a twist on the classic balcony scene. A strong ensemble cast with particularly memorable performances from Mercutio, the Nurse and the Sister, but the stars of the night were young Juliet and Romeo with such well portrayed characters that you really believed in, cared for and were heart broken for. Well done to all involved! Go see this show, people..." Matt S

"It was totally amazing... I now know the story of Romeo and Juliet as I didn't til I went to the Sewell Barn... A brilliant performance all round but especially from Juliet... I've never seen so much passion go into a performance." Elaine P

"What a fantastic production of Romeo and Juliet this evening - both Jo and I thoroughly enjoyed the play, it was absolutely brilliant and had so much unexpected humour, I hope you heard my laughter. Please tell all of the cast how much I enjoyed the production and I thought the standard of acting was ‘first class’ - well done to everyone." Sonya B-M

"It was FANTASTIC!!! And I’m honestly not just saying, but I think that’s the best production of Romeo and Juliet I’ve ever seen, and I’ve seen it with the RSC twice." Hana H

"Fantastic! Absolutely enthralling from start to finish with an exceptional cast!" Rachel M

"I had the loveliest evening. ‘Romeo & Juliet’ at the Sewell Barn was a lively, thrilling, ingenious and superb production..." Vincent G

"Just wanted to say how much we enjoyed the performance last night! Everyone was brilliant -- how you can all memorise that much Shakespeare I never know! I struggle learning my lines for an Ayckbourn, and there is no room for paraphrasing in Shakespeare! The students were all captivated. It is no mean feat to keep 50 Year 9s and 10s quiet, even a relatively civilised bunch like ours! Everyone I've spoken to today loved it. We will keep our eyes on your programme for future events." Melissa C - Cromer Academy

"Romeo and Juliet were amazing... and Mercutio. They stood out for me, Rebecca was delightful and gorgeous as Juliet as were the two young men. They really understood what they were saying which helped the audience. Loved the nurse too. Well done to all the cast and crew." Ruth H

"Congratulations to the cast and crew of Romeo and Juliet at the Sewell Barn Theatre. Well worth catching one of the final three performances if you can! A totally engrossing production, great teamwork and outstanding individual performances." Clare H

"Massive massive congrats to the team of Romeo and Juliet at Sewell Barn. Laughing one minute and crying the next.... Greg 's particular scene left me in complete tears clutching Megan-Alice' s hand hoping what we knew would happen wouldn't happen! And Romeo and Juliet, Charlie and Rebekah, the two of you were cute and so perfectly cast, again crying at the fate of your characters because you just want it to work out so much. Wonderfully judged performances, perfect understanding of the language and the characters making them entirely relatable and lovable in a modern setting. It was lovely to see a production that embraces the different nuances of the writing, bringing out the comedy and the tragedy of a beautiful piece of work giving it new life. Go and see it whilst you can!" Sabrina P

"Went to see Romeo and Juluet at the Sewell Barn tonight. Now I know I'm somewhat biased being Artistic director, and my fellow AD is in the show, but I've also seen a good few R &Js in my time and I can say in all honesty that this modern interpretation was one of the most believable and absorbing productions of this iconic play that I've ever seen.

Rebecca Oelrichs as Juliet set the tone perfectly, conveying the capriciousness and impetuosity of a 14 year old through totally truthful vocal and movement work and the balcony scene with Romeo above and Juliet below is a joy to behold.

Comedy is not always a word associated with R & J but it was beautifully conveyed by the ensemble in the first half, again through body language, tone and facial expression - showing evidence of great attention to detail throughout the rehearsal process. The fight scenes were powerful and painful, evoking the stark reality of death by knifings that is so common on the streets of London right now. Mercutio (played by Greg Arundell) was another highlight as we mourned his death after witnessing the energy and dynamism of his life.

But what made this production for me was the quality of the whole ensemble - from the actors to the backstage team, set designer and wardrobe all coming together to create an absorbing and powerful drama even though we all know the outcome. There are still seven performances so go and see this marvellous show!" Clare W [Joint Artistic Director]

"Romeo and Juliet last night was really rather wonderful. I don’t normally enjoy modern interpretations as I think they can get bogged down in trying to make the work fit the setting. But well done to all involved as this production certainly didn’t fall into that trap, the modern political themes, the condensing of roles and the modern costumes and really worked marvellously well. All performances were solid, with some people warming up into their roles (it was opening night after all!) but the 3 stand outs of the night truly were Rebekah Oelrichs, Greg Arundell and Charlie Skinner. Their vibrance, youthful dramatics and well thought through characterisation was really quite something to watch. Greg’s death scene really moved me, and in such a well known and over done monologue, that is no small thing!! The inclusion of knife crime elements really made this scene so much more harrowing and really pinned together the over arching theme of the folly of youth. The balcony scene. I mean. Beautifully directed and the PERFORMANCES it was such a rare treat to see subtle performances of such a delicate scene. They both really nailed this scene and it was magical having them on either side of the theatre with all that space between them. Such a wonderful tableaux." Megan R

"It happens to us all, if we are lucky, something about that face in the crowd grabs our attention and for a few moments the world stops. Dare we ‘risk all’ for a chance to get next to this vision?
For most of us all we really risk is the embarrassment and dejection of rejection, but that is enough to halt our amorous intentions. But when you are young and primed with passion and desire, even dare I say it ‘Love’, nothing is going to stop you, even the threat of Death.
But Fate plays dirty with this teenage couple, prompting from a friend brings them together, others support, encourage, this union hoping that it could even start to heal the tribal warfare between these families, like that’s going to happen!
But as we know this play so well, we don’t need the tragic denouement from the chorus, and the continuing portents of doom from the characters, Death stalks this play, and we know it too well.
Well! So why do we watch it?
Obviously, it’s in hope for a little bit of magic, a spark of chemistry between this iconic pair, and we are, very wonderfully, not disappointed. The couple together really do crackle.
Even separately these young actors show a grasp and familiarity with this sometimes archaic dialogue that is breath-taking. Showing such nuances of gesture and tone of voice that it seems the dialogue emerges from spontaneous thoughts, so we can understand the action in both the physicality and the language. This shows with the young men, Romeo bantering, and playful struggling with his friends, and, less playfully, enemies. They all make it look so easy, the language flows and action matching.
Juliet too shines, whether it’s in exasperated conversation with her nurse, or when no longer confined to her balcony she charges about the stage, swept up in the power of sudden love, William’s wonderful words are given even more power by her mastery of them. Romeo watches, appreciating this vision, no longer smitten by another, promising everything.
All the cast rises to the challenge of Shakespeare’s language making all the characters a delight to watch. Supporting and challenging the characters, the cast work wonderfully together, a super team effort, the ease belying the amount of effort involved to produce such a super production.
There’s lots of love and romance, some fun and laughter, tragedy and tears, as well as vicious fighting and slaughter. What more could you want from a special evening at the theatre? 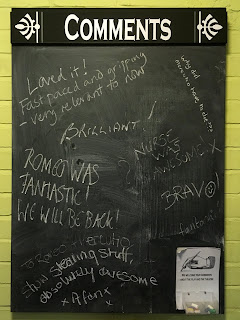