Accolade, by Emlyn Williams, has been the first show of the 2016/17 season, and we've been delighted to receive wonderful feedback. The comments below come from Facebook and Twitter, and you can also click on the photo at the end of this post to see messages on our foyer chalkboard from our audiences.

"Congratulations to Clare Williamson and her team for their production of Accolade at the Sewell Barn Theatre. It was a truly gripping play and beautifully interpreted in all aspects . I am glad I was able to get see it and thank you to the Sewell Barn for the opportunity." Clare H

"Well done to the cast and crew of Accolade at The Sewell Barn Theatre. An emotive and crackling performance dealing with issues as relevant today as when first written. A great opener to the new season - well done all." Angela R

"Great night at Accolade - fantastic show... Lots to talk about all the way home (is Will a bad man?!). Actors, set, lighting, costumes...all top notch. Well done Clare Williamson on brilliant direction - looking forward to our next visit to the barn already!" Becky A

"Fantastic show 'Accolade' at the Sewell Barn today. Wonderful performances and I am proud to say that I know so many of them. Well done to all the cast, director and stage management team." Wendy A

"The performance tonight was honed to perfection... thoroughly rehearsed, highly charged and very emotional... I loved the "off text" action and reaction, the pace was cracking, direction assured... and I could hear every word... good start to your joint debut season...." Malcolm R

"Just come out of @sewellbarn's production of Emlyn Williams' "Accolade". So powerful, so intense in exploring personal vice and its effect." David W

"Absolutely loved Accolade. Totally gripped by the plot throughout and loved the complexity of the characters. My daughter and I were discussing it all the way home - trying to decide whether we blamed Will or not for his actions. This is a play that will stay with me - thank you Clare Williamson and cast. Particular congrats to Will Sellgren for a mesmerising Ian - up there with the West End version! Your old drama teacher is very proud! So lucky to see such quality theatre at an affordable price." Sian D

"Went to see Accolade at the Sewell Barn. A brilliant production of this play by Emlyn Williams. Although written in the 1950s it is still so relevant today. The direction and acting brought out the subtle nuances of each character. Funny, tragic sometimes uncomfortable viewing but so very watchable. Well done all involved! PS - They used real books on stage. I'm told the titles were relevant to the play! It is on tonight, Friday and Saturday - get to see it if you can." Etta G

"Had a great night seeing Emlyn Williams' ACCOLADE at the Sewell Barn Theatre! Perfect performance as Phyllis, Ruth! Everyone was amazing - my friend and I were in awe, and felt very privileged to have this high standard of production happening on our doorstep. Congratulations all xx" Jen A

"What a cracking start to the new season! I was in the audience on the first night of Accolade and it is definitely one not to be missed! Clare, the director, has captured the era perfectly and the production is a controlled and measured one. There is a very talented cast, I will not single anyone out ... all the characters are totally believable. We agonise with Will for his mistakes whilst feeling irritated with him at the same time! We feel for his poor long suffering wife and hope that his agent will knock some sense into him! Will's son is a typical gauche teenager who is too naive for his own good! The almost sinister arrival of a visitor all adds to the suspense. light relief is added by the 'fun' loving couple from the pub Will frequents and I will say no more ... go and see for yourselves! You will not regret it." Jill F [Chair - Sewell Barn Committee]

"Huge congrats to Clare Williamson and all your wonderful cast on a superb first night of Accolade at Sewell Barn! Particularly liked the comment from the Italian guy in the row next to me who's staying with some local friends and said it was not only a brilliantly written play but a fantastic cast and the best evening at the theatre he'd ever had in England. Well done guys, keep it going for the rest of the run!" Selwyn T [Secretary - Sewell Barn Committee]

"What a superb and challenging production. I have never seen Accolade before, so did not know what to expect. Great performances all round. As an audience we were very engrossed. Well done." Barnaby M

We have also received a splendid and insightful review from Mark Mobbs:

"We all have many personalities that we use or choose to reveal at certain times and occasion’s. How these personalities affect our behaviour can also be very revealing. We do assume people have ‘codes’ that they live by constantly, whatever the situation they would not deviate unless extremely provoked. But what about someone with a dark side a real Jekyll and Hyde character?

Take an acclaimed writer; he must have a very fertile imagination to write the ‘artistic’ works he is famed for, they couldn’t be his actual experiences, or could they? We are drawn into the ‘lives’ of this writer, we feel sympathy for him as a character as his ‘problems’ become apparent, after all who hasn’t been ‘naughty’ sometimes, he wouldn’t ever do anything really bad would he?

His character is reflected in the ‘friends’ he chooses, at times they seem to be like aspects of his personality separated off and solidified. The agent, solid, sensible and controlled, trying to serve, protect and manage her friend but also knowing some of his secrets. And the ‘secretary’ a glimpse of his past, a working class wide boy who has fallen into good times.

The ‘darker’ side characters show the fun he has away from his normal life in the physicality of a very ‘alive’ naughty couple of characters, lively and vivacious, drinking, giggling with childish amusement, or showing macho energy and front, both characters promiscuous and amoral, but getting so much fun from it, there are no barriers to enjoyment here.

Then the, at first, very weak and dubious ‘wronged’ character (yes spoiler alert) confronts and makes demands that seem a bit vague, but later become more threatening as he reveals his real strength of character.

Another positive character is his wonderful wife, full of care, energy and passion, supporting , and possibly creating, the acclaimed side of him.

There have been plays at this special Theatre that slap you in the face with their action and physicality, the audience having to mind the blood on the floor when they came in. This one is different. Here you gradually become deeply engaged and feeling for the characters as the tale unravels, a slow burner but with some wonderful reveals, but the slap is still there waiting.

Spend an evening with this energised cast of characters, you will, of course, enjoy the production, but it will also make you think, and surely that is what great ‘Art’ is supposed to do?" 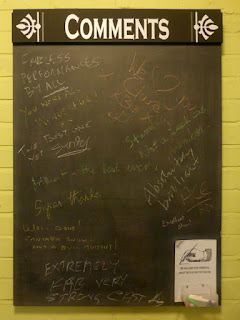