The Thrill of Love 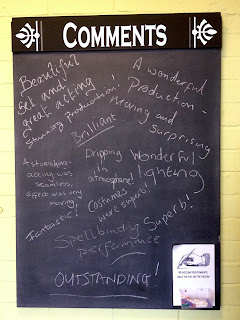 A review from David Porter of the EDP:

Poignant story with a punch

"There’s something about sitting almost with the performers, as the audience does at the Sewell Barn, that makes everything so intimate, so absorbing.

This play packs a punch exploring the tragedy that was the life and death of Ruth Ellis. Notorious as the last woman in England to be hanged, she is superbly portrayed by Abbie Eastwood - the frail, petite platinum blonde who dreamed of Hollywood but got Holloway.

The abuse she suffered and the dying of her dreams in the reality of life in seedy nightclubs was the backstory while the police inspector-cum-narrator (James Thomson) grappled to understand the woman who shot her lover.

Her speedy confession, explanation of all the facts except how she got the gun and her rejection of a final appeal comes over with shocking clarity. Director Ginny Porteous brings out her vulnerability amidst the wheels of criminal justice which contributed significantly to the abolition of the death penalty.

Friends who care (Jen Dewsbury, Hayley Evenett and Verity Roat) catch the 1950s period with its values and struggles to support the telling of this poignant, memorable true story."

[You can also see David's review on his own blog here.]

"Absolutely enthralling and powerful production last night. The Thrill of Love tells the tragic story of Ruth Ellis through an eavesdropping view of her emotions leading up to the murder and the acceptance of her fate. Just five amazing actors hold your emotions in their hands and squeeze them till you come away realising that the death penalty can never be right.

The entire cast starred, each bringing the characters back to life for the night, perfect casting as you really believed they were Ruth, Sylvia Vickie, Doris and Jack whatever the programme said their real names were.

I have always found the theatre perfect for some productions and this was certainly one as we sat at the table with the cast."

"[We] were at the theatre on Friday night to see the Ruth Ellis story "The Thrill of Love".  The acting was superb and all are to be congratulated.  We did not go home hopping and singing - but thoughtful, and feeling it was a very worthwhile experience."
at October 02, 2015 No comments: