Stella was, as many have said, the 'face of the Sewell Barn' right from our earliest days. Robert Little, Chair of Trustees and previous Artistic Director, shares his memories.

"I have just heard the news that Stella Jay has passed away. Our thoughts go out her family during these difficult times.

It seems that Stella was part of the foundations of the Sewell Barn. So how did it all start? Well, her son Peter was a student at the Blyth Jex School (as it was then). The headmistress at that time, Valerie Glauert, was mustering local support to help fundraise for a community Theatre. The Sewell Barn was born.

Stella, whose son was interested in drama, went along to offer her support. Peter would perform in the early days of the company; Stella came to help and loved being involved with all those friendly people starting a new, exciting chapter in the Norwich theatre scene. Quite simply, she never really left. She was neither an actor nor a stage manager; but she was involved in more productions than anyone else. Although never officially a member of the acting company, she certainly belonged to it, by default.  Stella was to head the Front of House Team for over 25 years before handing the title to her friend, Jane Page. She retired twice, although she kept coming back. She would restock the bar from the cash-and-carry, sort out the cleaning rotas, and sometimes take the rubbish home to her own bin.

She was a great persuader, managing to bring on board people to fulfil various roles within the Barn family. She served on the management committee for over twenty years, and then went on to become a Trustee. In her front of house capacity she would include most of her family - husband, children and grandchildren - although I suspect that was the best place to be able to see and speak to her. She also, with her husband Wilf, managed the distribution of our newsletter for many years. Her service to the company and the Sewell Barn in general was never a task or a problem: she loved to be part of it all. She was always willing to help where needed.

A friend of mine once said of Stella. “She is the face of the Sewell Barn, the first face to greet you when you arrive to see a show; always with a big smile, you know that you are in place that cares.”

Stella will be greatly missed by so many, but she will always be with us in spirit." 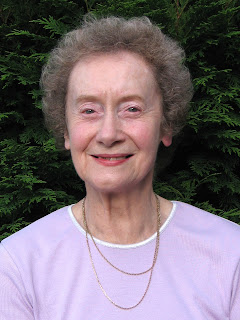 The photograph above was taken by Andrew Evans as part of a set of images of all Trustees and Committee in 2004. We brought Stella on stage – not in reality, but virtually – in my July 2019 production of Noel Coward’s Waiting in the Wings.  One character, Martha, was spoken of but never appeared. I needed, however, an image of ‘Martha’ as part of the display board of all the residents in their days on stage, and Stella’s family were happy to oblige with the lovely photograph below. We were delighted when they brought Stella to see her friends, and to see her own image as part of our front-of-house display, between the matinee and the evening performance of the show. She was a kind, gentle, hardworking and loyal member of our theatre family. RIP, dear Stella. 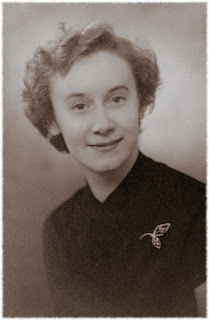 Since publishing the above tribute in our newsletter, we have received many lovely comments.

"I've been attending Sewell Barn for 35 years... she was always  there.. lovely lady. RIP" Ruth M

"I was saddened to read of the death of Stella Jay. She was one of my generation of Sewell Barn people! Though she did a lot more than I did; she was always there! We shared the highs, and occasional lows, but most of all the fun and laughs of many shows together. I echo Robert - RIP Stella and thank you." Frances M

"So sorry to see Stella Jay has passed away. She truly was the Face of Sewell Barn." Cherry C

"Really sad to hear Stella passed away. My love and thoughts go with her." James B

"A lovely tribute to Stella, a character the like of which we won't see again!" June G

... and many, many tributes on the posting on our Facebook page can be seen by clicking here (you will be able to see it whether or not you have a Facebook account).
at November 16, 2020