"Can we have it all? Dr John Faustus thought so, and the terrible price he pays for gorging his appetites is explored in this timeless morality play.

Faustus makes the original pact with the devil. He sells his soul for eternity in return for 24 years of his every desire being satisfied. He has great knowledge but cannot satisfy his thirst for more and once given access, the devil seduces him by degree with baser and baser temptations."

"This play has long been a favorite of mine and I have seen it staged a number of times over the years. This production/direction/design was the best, the most creative and sizzling! I loved the use of masks, especially with Helen - superb. Adam Edwards was quite brilliant and John Dane. Also Nina Taylor as Good and Bad Angel - what a great idea with the mask and the way she switched from one to the other. Unfair in a way to single out when it was altogether so exceptional. Thank you all so much." Jill C

"Yesterday’s matinee of Dr Faustus, what an unexpected gem to discover in Norwich on a wet Saturday afternoon! I’ve not been here for 30 years and now wish I’d not waited so long. Such a small space requires good performance and it was. Very good indeed. It seems unfair to single out any of the excellent cast but Adam Edwards and John Dane were engaging and intense throughout and Giles Conneeely a delight in all his guises. Particularly enjoyed the Nod to Norfolk in the comic characters! A delight!" Alison U

"This production is a masterpiece, which is not a phrase I use very often! The play is presented with great clarity and inventiveness by a first rate cast, who left us in a stunned silence. Masterful and electrifying." Barnaby M

"Do go and see Faustus at the Sewell Barn. It is the most accessible and persuasive production of this piece, professional or amateur, that I have seen (including RSC). It has been heavily cut, it is 21st century, and it is powerfully acted throughout. Director Chris Bealey and his cast and creatives have taken the essentials of Marlowe's poetic and dramatic masterpiece and made them work for a modern audience. Thanks to a great team and to the genius of Christopher Marlowe." David N

"The text was delivered with admirable clarity by everyone and the whole play was played with great pace. There was never a dull moment! Congratulations to everyone involved." Tim S

"Saw the show on Saturday eve. Thoroughly enjoyed. Highly creative production, good story-telling and great performances. Congratulations to all involved. Hope lots of people get to see it later this week!" Pip S

"In the title role Adam Edwards has great tone and presence, descending into a despairing mess as his dreadful destiny becomes all too discernible. John Dane’s Mephistophilis wields an intense and cruel power; tightly wound and viciously bitter.

"I was seriously impressed by the inventiveness, accessibility and sheer brilliance of this production.  To me, the originality and creativity of Chris Bealey's interpretation makes this the definitive version of Faustus." Phillip Williamson [Marketing Manager]

"Chris Bealey's remarkable production is pared-down, minimalist, relevant, powerful and thought-provoking. His team - actors, technical, backstage, design and crew - have worked together beautifully and produced a first-rate evening of theatre, with imaginative effects and superb stagecraft. The powerful partnership of John Dane as Mephistopheles and Adam Edwards as Faustus is utterly mesmerising and absorbing, and the archaic language is delivered with fluency and conviction. The supporting cast are all magnificent, with multiple character delights from every single one." Cassie Tillett [Joint Artistic Director] 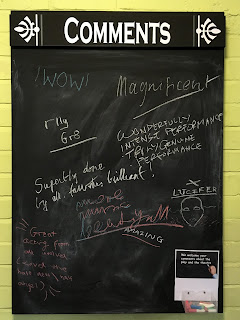 Email ThisBlogThis!Share to TwitterShare to FacebookShare to Pinterest
Labels: 2019, Faustus