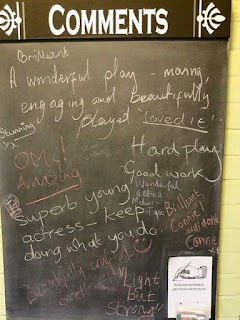 Beautifully restrained yet emotionally charged piece about a decent family dealing with (or not dealing with) a crime and its punishment. Both the writing and the performances exemplify the dictum 'less is more'. Make time to see it.

Great play - very impressed with the youngest lady on the cast, but all were fab. Well done.

A well-conceived symmetrical set focussed us from the beginning [from before the beginning!] on Alan as the nucleus of this drama, then unfolded and changed as his centrality began to shift, through the first half, to be revealed in the second rather as the epicentre of a domestic social earthquake. The play itself, like the set, is deceptively simple, and despite the undoubtedly skilful writing, I can imagine it being unjustifiably brought down to the level of social-realism dreariness that has become fashionable, if attempted by mediocre artists.

But certainly not here. Full personalities emerge from what could, in the wrong hands, be so-ordinary characters, and everyday difficulties that so many ordinary folk have to endure have their sharp depths shown to us, often profoundly. It's a short play, but doesn't feel like it, because it's real – I can't find a more suitable word - all the time. Jen Dewsbury has done sterling work in getting to the foundations of things, and her actors have responded with power and sensitivity.

Time and pace are used for a lot here. I'm not sure if the projections between scenes of dates and memorable current events are original to this production; they were interesting, and definitely helped those of us not in the first flower of youth to find an authentic flavour of setting; but I did want them to follow one another a bit faster. However, what no fault can be found with is the treatment of spaces in dialogue – even in the action, occasionally – reflecting the spaces between the people. As is well understood by any playwright, what on the stage affects us as real is actually pretty artificial. There's a huge danger in just copying what goes on in the real world; and one of these pitfalls is in the naturalness of pauses and silences. In this production the director has been very daring, pushing these spaces to the limit, not just those charged with passion, but also the awkwardnesses and embarrassments, the uncertainties and hesitations that could so easily bog down a staged dialogue with a plot to keep moving along. It could have gone wrong – some of these 'gaps' were right on the edge of acceptance; but, again, the company must have so well and intelligently explored this piece that every space came to us as entirely relevant, telling its own tale, pushing on the story.

Glenda Gardiner as the mother trying to be kind through the damaged shell of respectability was perhaps the best exponent of these 'filled spaces', showing the working of a shocked mind wanting distance or closure, and fearful of more discoveries; an admirable control of a role; while the husband Roger Gardiner provided the contrast of jerky frustration and repressed rage, inarticulate until at breaking point. Rebecca Wass's character had less strong, more diffused, emotions to deal with, but she proved the same mastery of silence over rich subtext; and Rachel Godfrey-Bennet showed us splendidly in her now assured and spirited stride the rapid life-changes and character development of the other sister. A great pleasure indeed to watch all these acting skills. The child of the piece [alongside which [along with animals], one should never act, as the old adage runs!] in this instance did not steal the show from the adults – they were too good for anything like that to be possible – but, my, how well she did. Connie Reid must have been acting, because she must have been aware of stage and audience etc, and her character was of a different age; yet one would never have guessed. The charm and humour of a small child's actions and mannerisms, all authentically there. And last of this small and intimate and so-mutually-responsive cast, Steve Dunn as the empty hole at the centre of the wheel of destruction that no-one was willing or able to help to fill with new good things, gave us great stage-presence and a perfectly-played understatement to display a sympathetic character, trying to learn through a hard field of many misdirections, a basically strong man whose faults could so easily be transformed by the encouragement of his finer qualities, if only... He achieves a lot, this actor, and I'm always impressed by how he can do it so economically. Certainly one of his best performances, strong and deep and touching.

Good work also by all the backroom people. The baby's cries were stereophonically too high up and to stage-right; and, did she rather strongly hiccup at one point? No, I expect that was just an extra bit of expertly-conceived and executed realism... :)

So, great work again by the Sewell Barn. Please go and see this, anyone who hasn't. Three more performances only! And, although they missed the opportunity of a raffle for the cake, you do get a free baking lesson included in the ticket price!
at June 22, 2015