Acclaimed author Margot Mason has writer’s block and is struggling to meet a deadline. She is interrupted by the arrival of an unexpected guest, followed by several more uninvited visitors.

This wickedly satirical comedy, verging on farce, was inspired by a true-life incident involving Germaine Greer and a student. It is full of drama, bad language, bad behaviour and some rather deliciously ridiculous people.

Full of characters that are as colourful as the language and the set, this fabulous comedy is a great way to celebrate our 300th production at the Sewell Barn Theatre (during our 40th season).

"The Female of the Species - absolutely superb! Firstly, I'd like the chaise lounge please...  Beautiful, bright bold set, fantastic strong cast, a serious yet hilarious play - a must see! Thoroughly enjoyed it from start to finish." Gwen H-C

"‘The Female of the Species’ is a brilliantly incisive piece of comedy theatre, penetratingly exposing the bulls**t of self-righteous glorification." Vincent G

"I enjoyed the play, well written and acted, great set too." Chris B

"We travelled 230 miles to see ‘The Female of the Species' at ‘Sewell Barn Theatre’ last weekend. We were certainly not disappointed! We were immediately impressed and also entertained by the colourful, interesting and clever set. The cast were all excellent with some extremely witty and convincing performances and we thoroughly enjoyed the evening. Well done to everyone who took part. If you haven’t seen it ..... get your tickets.... you won’t be disappointed!" Jan H

"Another brilliant show with excellent performances all round! Funny too! Well done." Shelagh S

"An entertaining 90 minutes of action... Michelle Moore steals the show with a fine performance as the writer's unloved offspring - now a tired mother-of-three and at the end of her tether. Her tantrum at the insanity of parenting is brilliant, falling to the floor something like a defeated toddler herself. The design team of Pete Sessions, Jo Parker-Sessions, and Phil Williamson have had fun with the set and props, with great fake book covers and well-executed gun shot effects that build up a visually delightful production." James Goffin, EDP [click here for full review]

"I'm just home from the Sewell Barn theatre where I've been extremely well entertained by the fabulous cast of The Female of the Species! Having had nothing to do with this production, apart from reading it a year ago when Mel Sessions (the director) first suggested it, it's been a joy to discover what a great show it's turned out to be. Clever, serious, witty and with a bit of silliness thrown in, it makes you think and laugh in equal measures - the best sort of drama in my opinion. It's been beautifully directed, the cast are fantastic and the set showcases interior design at its showbizzy best - I want that chaise longue now!" Clare Williamson [Joint Artistic Director, Sewell Barn] 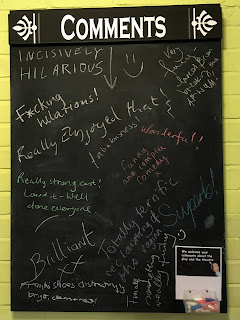 Email ThisBlogThis!Share to TwitterShare to FacebookShare to Pinterest
Labels: 2020, Female of the Species 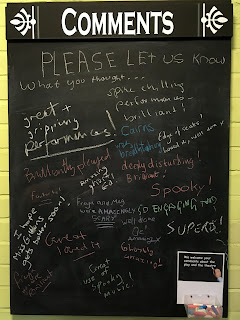