A Chorus of Disapproval

Alan Ayckbourn's wonderful comedy rang true for anyone who's been a member of a club, society or group. As one of our reviewers said, "The performances are all honest and real" - every one of the fourteen actors presents a very recognisable personality...

"Haven't laughed so much in ages, what a fantastic show, beautiful singing too, well done to everyone involved." Ruth H

"Had a great evening watching A Chorus of Disapproval at the Sewell Barn last night - lots of laughs, high production values and beautiful characterisation. Well done and thank you." Clare H

"Enjoyed it immensely. The cast seemed effortlessly (or should that be seamlessly?) meshed into a well tuned ensemble - the mark of good direction and casting coming together." Jack S

"There is an excellent production of Ayckbourn's A Chorus of Disapproval showing at the Sewell Barn at the moment. We saw it at last night's packed performance,and thoroughly enjoyed it. It is a cracking, crackling show, intelligently directed by Cassie Tillett. Minimal settings that keep the action flowing seamlessly, and a staging that enables all characters to be seen and heard (something that has been sadly remiss at recent productions in another local theatre!).

The performances are all honest and real, and very funny. Mark Kitto drives the play with his energetic, slightly manic portrayal of Dafydd ap Llewellyn, with a nice touch of pathos at the end, and Nick Meir is very good as the hapless Guy Jones. They were all excellent, but I hope the director will forgive me for singling out Mandy Kiley as Enid. She was so real and warm, in what I suppose is a small part, if you use those terms, that I had to be restrained from leaping on stage and hugging her!

I confess to having an aversion to Alan Ayckbourn, which I think has developed from seeing so many bad amateur productions. I am so relieved to say that Cassie Tillett, and her excellent company have restored my faith. Well done, everyone." David W

"3 more days and 4 more chances to see 'A Chorus of Disapproval" at The Sewell Barn in Norwich. Make it a priority if you haven't been yet. Highly recommended!" Steve A

"Funny play. Lots of laugh out loud moments... Definitely worth a look if you have an evening free. A total bargain night out too." Marie C

"This is a great production of one of Sir Alan's finest comedies - characters are so well formed that much laughter and contrasting emotions sit well together - don't miss it!!! Well done everyone." John G

"Superb show! So much passion, energy and talent. And what surprising singing voices! And a round of applause for Jonathan Redding and the stage crew - such swift and precise settings! Well done Cassie and all! Do see it Sat! Last chance!" Robin S

And finally, a wonderfully detailed and appreciative review from our good friend Rob Fradley-Wilde:

"Last night was a real treat: one of Ayckbourn's most successful comedies given by fifteen most excellent performers. I say 'performers' because they sang and played as well as acted. Even those new to singing did a fine job, and should continue and develop their skill. The director Cassie Tillet certainly had an envious cast, but that in no way detracts from her accomplishment here: no dull spots, with clarity as well as good pace – the play's more-than-average length presented no difficulty for us.

New to me were David Vayne and Diane Webb, with small but well-realised parts. Selwyn Tillet brought his pianistic skill [only one and a half fluffed notes out of thirty-seven thousand, five hundred and forty-nine – not bad] – and behind the scenes I dare say his coaching methods will have made invaluable contribution to this show's success. Lovely flute playing by Jessica Hutchings took us nearer to the time of the 'play-within-a-play', as a delightful addition to her great and in this case vigorously-applied acting talent.

Then there were the four couples. Gill Tichborne, undeterred by breaking an arm in rehearsal, swanned around in her great style, an unlikely though perfectly feasible wife to the block of a stereotypical Yorkshireman pushed at us by Peter Wood, cleverly alternately boring then waking-up the audience as well as his co-characters. Mandy Kiley and Kevin Oelrichs just had us in stitches with their double-acts, but we felt deeply for their sufferings. Their daughter was seductively played by Fiona MacPherson, whose feisty war with Jessica Hutchings's character delighted us as much as her clear soprano. Quite different colours were applied by James Thomson, sinister and dangerous, and his sexually-manipulative wife so joyfully and ruthlessly [no pun intended] played by Ruth Bennett. And as though all this were not enough, Emma Kirkham and Mark Kitto showcased their deep theatrical skills [and capacity for sheer work!] in the complex characters of the director blinded to the state of his marriage by the stress of his obsessive need to create, and his repressed wife tormented by her own different needs for recognition and understanding.

And into this heady mix comes the self-effacing, unsure but honest Guy Jones, played with confidence, courage, and a very impressive empathy, by Nick Meir.

Lastly, Jonathan Redding left his stage-management desk for what must be his smallest-ever role – small maybe, but beautifully formed!

In short, a very talented ensemble who drew their characters and the complicated relationships between them with skill and charm and energy, moving from brisk and physical through humour to tenderness and poignancy. They made the drama easy to follow, thoroughly enjoyable, and kept our interest unflagging throughout.

Noting to fault – one would have to nit-pick about a slightly- mistimed start from one of the set changes, or, in the music, the odd note slightly awry, or breathing a little unskilful [though of course they were playing amateur singers!]; anyway, nothing of substance. The singers' [and accompanists'] sense of time and rhythm, and togetherness, was good. Indeed, the delivery of the memorable and lovely solos, duets, trios and choruses, from the original Beggar's Opera, ranged from more than adequate to, often, very fine. We were charmed by the musical element as much as by the drama.

So - love, spite, pathos, fights, sex, music, jealousy, sharp practice, and actors acting actors – what more could you want for a hugely enjoyable evening's entertainment? If you've not been, well, only Saturday's performances to go now, but this play, one of the Sewell Barn's best, will make rearranging your weekend very worth while." 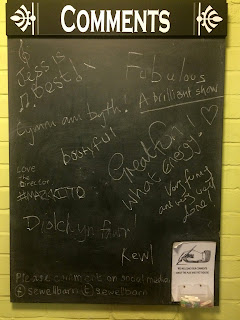